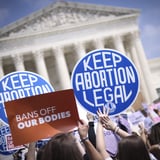 It's been over 100 days since the conservative-majority Supreme Court overturned Roe v. Wade, the landmark 1973 case that protects the right to abortion in the US, in its decision in Dobbs v. Jackson Women's Health Organization. After Politico published a draft opinion on the case, which challenged Mississippi's ban on abortion after 15 weeks, it became seemingly confirmed SCOTUS was poised to overrule Roe. Still, it was overwhelming to experience the moment in reality.

"Roe was egregiously wrong from the start," Justice Samuel Alito wrote in the draft opinion, calling the case's reasoning "exceptionally weak" with "damaging consequences." The syllabus outlining the official ruling of the Court states, "Like the infamous decision in Plessy v. Ferguson, Roe was also egregiously wrong and on a collision course with the Constitution from the day it was decided." As a result of this ruling, there will be no federal protection for abortion rights; the decision now resides with each state. As of Oct. 3, more than a dozen states now ban abortion at or before six weeks, when many people don't know they're pregnant.

As the months have passed, shock and anger have given way to determination and action. "This is a critical time for supporters to channel outrage into action: we will not quietly stand by and let our rights be stripped away," Jamesa Bailey, director of Black campaigns at Planned Parenthood Federation of America, told POPSUGAR after the early-May publication of the leaked draft opinion. And the same is true now. Although Roe v. Wade has been overruled and abortion bans are already in place in some states, there are things you can do right now to fight for abortion rights.

Related:
What the Leaked Roe v. Wade Opinion Means - and What It Doesn't

You've probably been hearing this for months, but donating to an abortion fund - which help people pay for abortion care or the travel required to get it - is an actionable and impactful step that's especially critical right now. "Abortion is expensive," explains Elizabeth Nash, principal policy associate for state issues at The Guttmacher Institute. "A typical abortion costs about $550, but those costs vary greatly and increase when a patient must travel far distances."

Lupe M. Rodríguez, executive director at the National Latina Institute For Reproductive Justice (also called the Latina Institute), recommends donating to a local abortion provider or the National Network of Abortion Funds. Nash recommends the Groundswell Fund, which "supports reproductive-justice groups around the country," and the Keep Our Clinics campaign, which supports independent abortion clinics. You can also contribute to a state fund in a highly restricted state. Here's a list of abortion funds in each of the 22 states the Guttmacher Institute considered "certain" to restrict or ban abortion outright when Roe was reversed.

We know how tiring it is to hear this over and over again in times of crisis, when it feels like the democratic process isn't working and that voting isn't enough. But at the same time, this moment is an example of just how much voting matters. Three of the justices that sided with Alito's opinion were appointed by former President Trump, whose presidency flipped the court from a near-even ideological deadlock between Republican and Democrat appointees to a 6-3 split in favor of Republicans. Had Trump not been elected, the court and the outcome of Dobbs could have been very different.

In his remarks from the White House on June 24, President Joe Biden reminded us that Supreme Court nominations aren't the only reason to vote, emphasizing the importance of November's midterm elections. "This decision must not be the final word. My administration will use all of its appropriate lawful powers, but Congress must act. With your vote, you can act, you can have the final word," Biden said. He also added, "This fall, Roe is on the ballot, personal freedoms are on the ballot, the right to privacy, liberty, equality, are all on the ballot."

While Democrats hold a majority in Congress right now, that may change after the November midterms, which makes this election all the more urgent. And at this point, voting is "harm reduction," says Rodríguez. "We know that things could be worse. It's terrible to say that, and it is demoralizing to hear that - that we're voting for the most basic protection - but that is the system we operate in."

If we want to protect abortion access, it's vital to vote at all levels of government for officials who are willing to fight for the same. Research where your current congressional representatives and state legislature reps stand on abortion, register to vote, and cast your vote in midterm and general elections for a candidate who will fight to protect this right.

Reach Out to Your Elected Officials Now

Reaching out to your state representatives by phone, email, or mail can impact the state laws that will now determine the legality of abortion. On the federal level, Congress has the option to codify Roe v. Wade "with a national law protecting abortion rights," Senator Elizabeth Warren wrote on Twitter. Senator Bernie Sanders and Representative Alexandria Ocasio-Cortez have also spoken up in support of codification.

As it stands, such a law would not be able to pass the senate without a minimum of 60 votes due to the possibility of a filibuster - a strategy that that senators use to "prolong debate and delay or prevent a vote" on a bill or other debatable question, according to the US Senate website. With the chamber currently split 51-49 in favor of Democrats, Republicans could filibuster any abortion rights bill out of existence. That's why many Democratic members of Congress are also advocating for an end to the filibuster as a way to pass an abortion rights law - and why the filibuster is something to mention when pressing elected officials for abortion rights.

Related:
Should You Stock Up on Emergency Contraception Now That Roe v. Wade Was Reversed?

Understand What Resources You Have

Available over the counter for anyone of any age, morning-after pills are one of the most accessible forms of emergency contraception. Nine states have restrictions on the morning-after pill, but we aren't under imminent threat of losing this right just yet. Experts previously told POPSUGAR that, as of now, emergency contraception is unlikely to be outright banned in the US. So, there's no need to stockpile dozens of pills - doing so could, in fact, create shortages that affect people who need the medication right now. It's not a bad idea to have three to four packs at home, doctors say, but be careful not to take any that have expired, as this can make the pill less effective at preventing pregnancy. You can also speak with a doctor about other pregnancy-prevention options, such as hormonal birth-control pills or intrauterine device (IUDs).

Volunteer to Do Voter Outreach

Besides voting and encouraging your friends and family to do the same, you can volunteer your time with voter-outreach organizations. This includes volunteering with local or state-level candidates who support abortion or getting involved with an organization like Vote Save America's Adopt a State program, which allows you to do outreach specifically in "battleground" states where abortion rights are most under threat. You can also get involved with Planned Parenthood and other advocacy groups, which are collectively planning to spend $150 million on the upcoming midterm elections. In a June 24 tweet, former President Barack Obama encouraged people to stand with groups like Planned Parenthood and the United States of Women, "who've been sounding the alarm on abortion access for years." The tweet also urged people to act: "Stand with them at a local protest. Volunteer with one of their organizations. Knock on doors for a candidate you believe in. Vote on or before November 8 and in every other election."

Get Involved in Protests

Protests started right after the Court's ruling and have continued for months. "It's incredibly important to be on the ground, to be mobilizing, so that these folks who purport to represent us [in government] understand the gravity and the anger and the groundswell," Rodríguez tells POPSUGAR. "Our democracy, a just democracy, is not something that you just get," adds Angela Cobián, director of coalition advocacy at the Planned Parenthood Federation of America. "It's something that you have to fight for and that you have to sustain."

If you choose to protest, make sure to do so safely. Wear a mask and cover your skin and eyes (with glasses or goggles) in case of pepper spray, and consider leaving your phone at home due to privacy concerns. Know your rights in case of police presence.

Following abortion-activism groups on social media is a good way to educate yourself and stay involved and up to date. Groups like the Guttmacher Institute, the Center for Reproductive Rights, Planned Parenthood, and Still We Rise focus on advocating for abortion and spreading facts and research. Following these groups is also a good way to learn about planned protests.

Understand What This Means For Your State, and Make an Emergency Plan

Now is the time to research your state's laws on abortion - what restrictions (if any) are already in place, what laws may be passed in the future, and what you can expect in the coming months. Talk with friends and family to come up with a plan in case you or someone you love ends up needing an abortion in a state with restricted access or a ban. Bailey recommends using Abortion Finder to find a verified abortion provider near you.

If You've Had an Abortion, Share Your Story If You Can

If you feel comfortable and safe sharing your personal abortion story, you can do so on the Planned Parenthood website or through We Testify. While no one should feel pressured to divulge private health information, for those who want to and are able, sharing the firsthand experience of having an abortion can be empowering and destigmatizing; so can sharing why you're fighting for reproductive rights, even if you've never had an abortion yourself. "Abortion doesn't just affect folks who can get pregnant," Rodríguez says. "It affects everyone." Sharing your point of view can help chip away at the stigma around abortion, she says, and personalize the implications of this ruling for the people in your life who may think this issue doesn't affect them or anyone they know - which is likely false, given that about one in four women have an abortion in their lifetimes. "Everybody knows somebody who's had an abortion, whether or not they've heard the story, and so I think it's critical that we personalize this if we have a story to tell," Rodríguez says.

Related:
Phoebe Bridgers on Why She Decided to Share Her Abortion Story
﻿
Read The Rest at PopSugar Fitness- (opens a new tab)