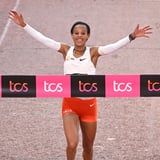 After tripping over an inconspicuous speed bump midrace, the odds were not looking good for Ethiopian runner Yalemzerf Yehualaw at the London Marathon this Sunday. The stumble not only left her hurting but also cost the 23-year-old precious time, leaving her about 25 meters behind the rest of her competitors (per the Guardian's estimate) - and she still had six long miles ahead of her. Yet, in a major comeback, Yehualaw still managed to cross the finish line first, officially becoming the youngest woman to win the London Marathon. Yehualaw ended up finishing the race in two hours, 17 minutes, and 25 seconds, setting a new Ethiopian record, as well as the fastest debut time in the history of the women's race. (FTR, that breaks down to 5:15/mile.)

Yehualaw's is the kind of win everyone loves to root for: the kind that reminds us not to quit when we're down . . . literally. Despite her fall, Yehualaw still finished with the third fastest time ever in the women's race. And to add to the accomplishment? This is only her second competitive marathon; she ran her first back in April in Germany.

Yehualaw spoke more about her fall after the race, telling the Guardian, "I was heading to a water station so I did not see the bump coming." She had to push past the pain in order to reach her stunning victory. "It was very painful. I have lost some feeling in my hip, knee and my hand. They are still sore now," she added.

Although this was a huge triumph, Yehualaw already has her sights on an even more impressive goal: "It is my first time in London so I am so happy to win," she explained. "But the longer plan I have is that I would like to next time break the world record."