'EastEnders,' looking like a celebrity, Phoebe Bridgers, and other things that went viral on TikTok this week 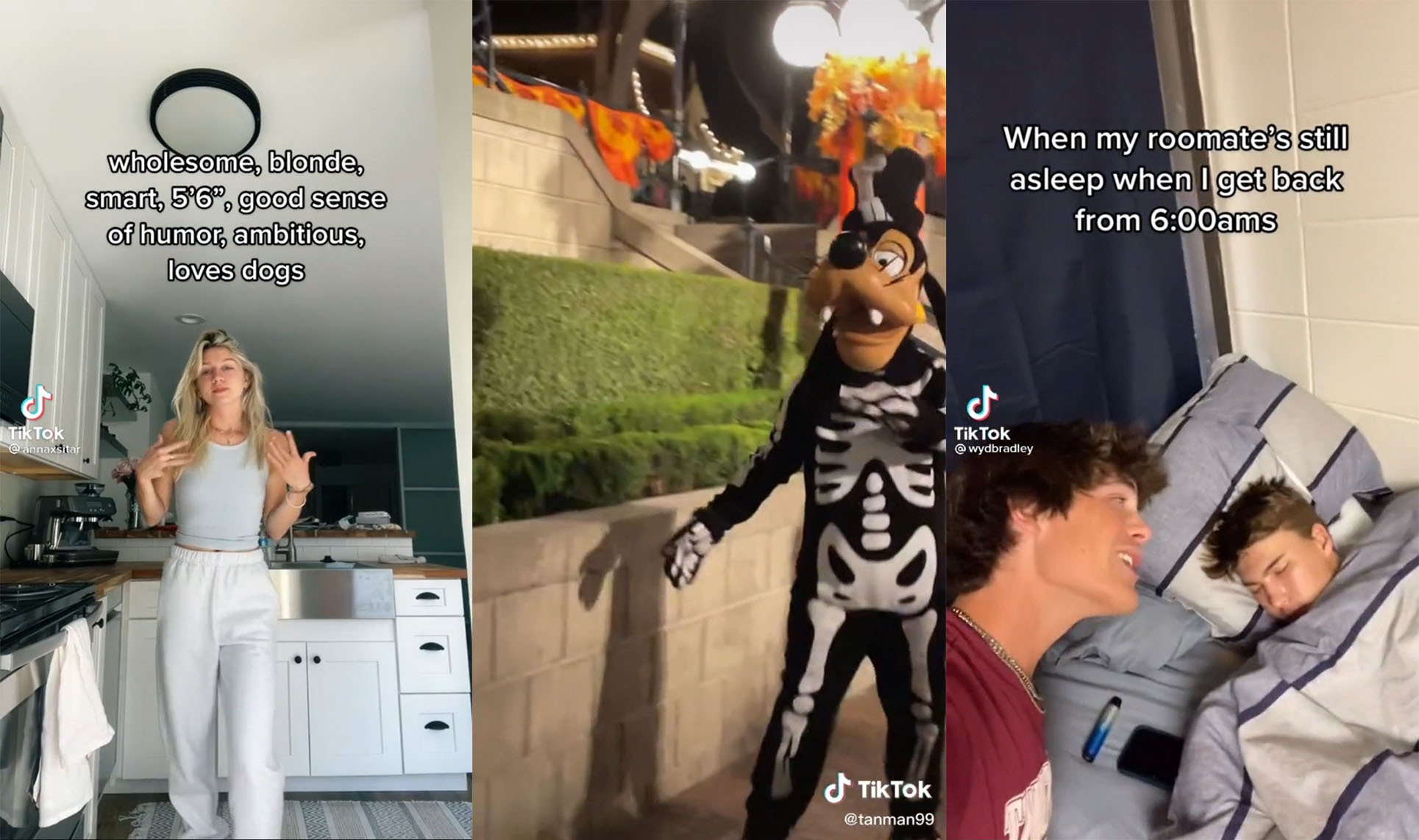 While you were sitting around

The audio "That's the difference between me and you. Cuz while you were sitting around waiting doing niche, I was out, making moves" gained popularity this week. There are now more than 10,000 videos under the sound. The audio is pulled from EastEnders, a British soap that's been on BBC One since 1985. The episode that the viral TikTok audio is from aired Sept. 17, 2012.

The audio is very dramatic and in a British accent, which makes these videos really funny. Users pair the soapy audio with videos shot in two times speed where they use crisp, dramatic gestures. The videos all have relatable text that doesn't warrant the theatrical audio, which makes them all the more absurd. For example, @dolewhipfloat's video reads, "when i stand up on the train and walk to the door before it gets to my stop so i'm the first one off." 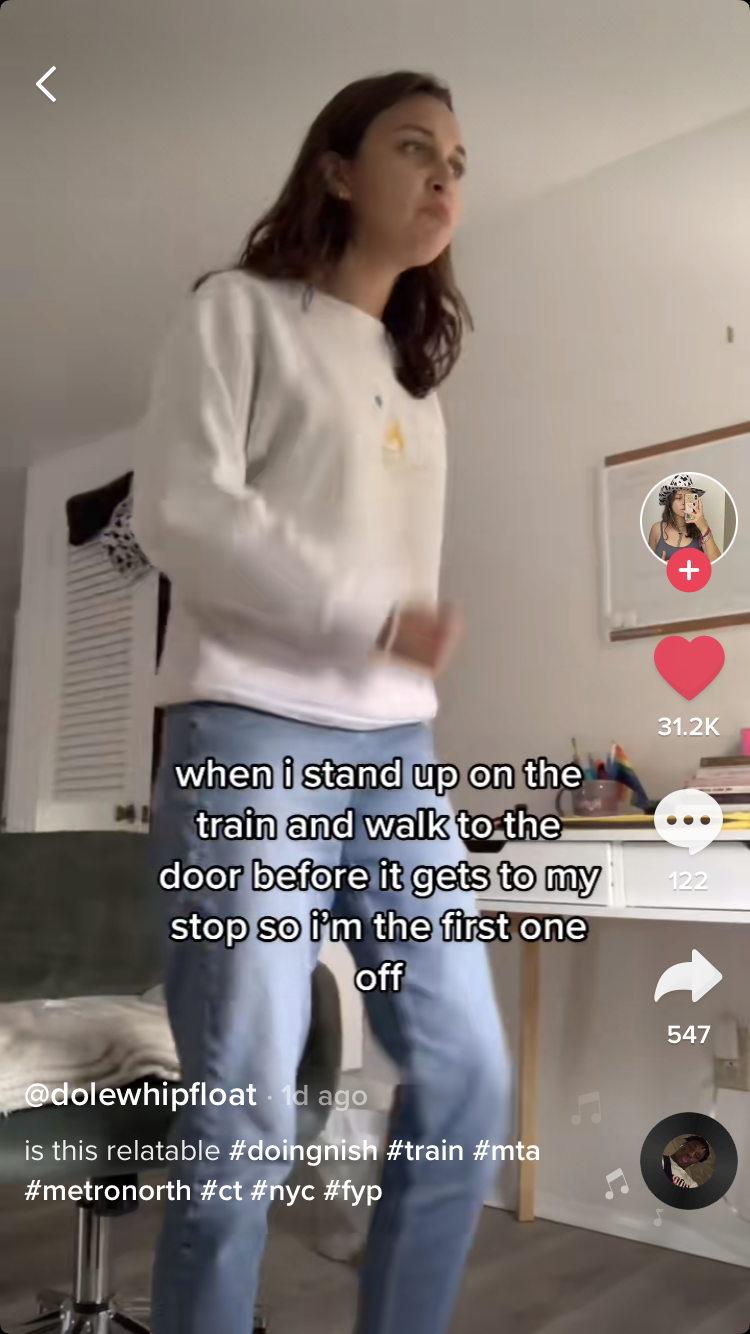 It is relatable. Credit: tiktok / dolewhipfloat

When it comes to a drink

On Sept. 29, black creator @chunkychicaaaa posted the audio, "Aaaand let me just say this, when it comes to a drink Imma have it," with the text "When my man tell me to chill with the drinking." The audio took off and now has over 33,000 videos of people making jokes about everything from iced coffee to strawberry lemonade to drinking at a wedding. The audio is in African American Vernacular English (AAVE), and white people's exaggerated use of the audio has spurred black creators to speak out about cultural appropriation on TikTok.

On Oct. 5, @rvyna made a video to the sound with the text "POV: You're watching another yt woman turn into an exaggerated caricature just bc they hear a black woman on an audio." In the video, she mimics the way white women have been using the sound. Her video has over 185,000 likes and nearly a million views. @kierabreaugh stitched @rvyna's video and posed the question, "when you come on this app, how often do you see white women white women-ing versus how much do you see white women black women-ing badly?" @kierabreaugh urged white women to be their authentic selves on TikTok. 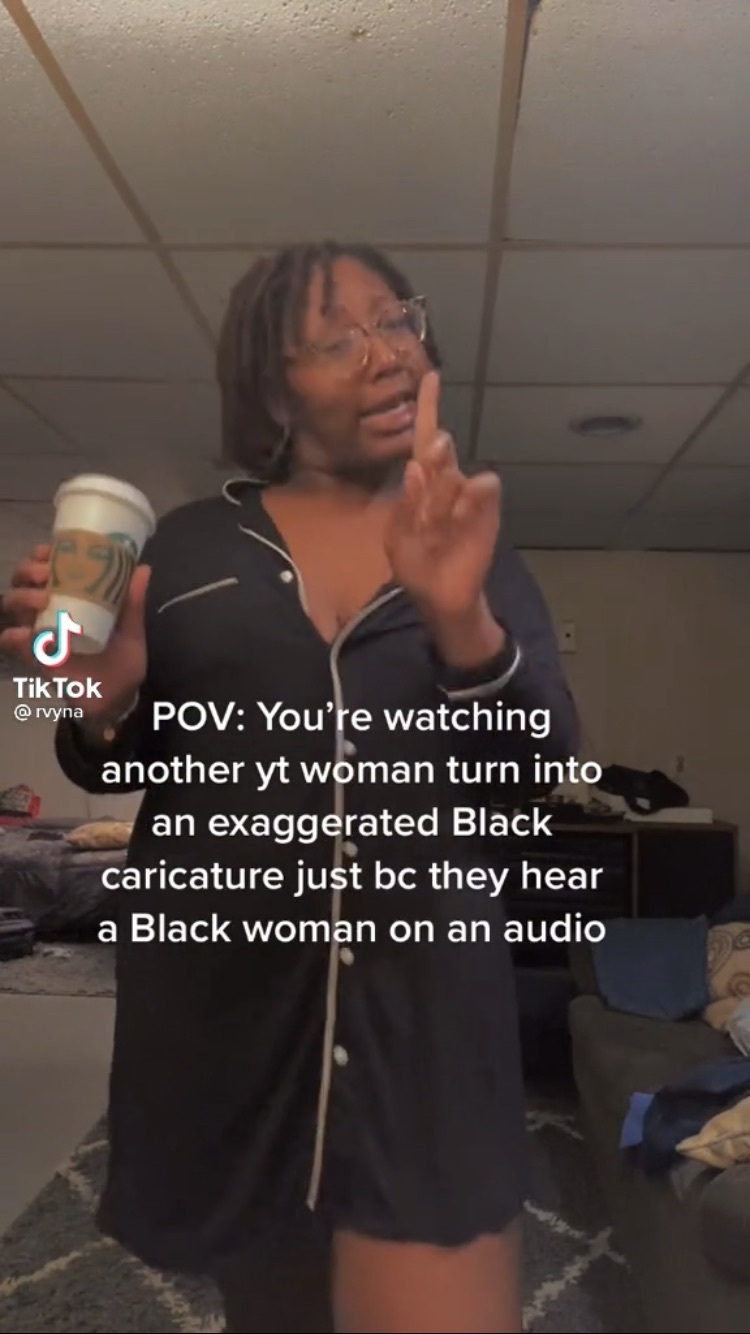 @rvyna points out white women's offensive use of this audio. Credit: tiktok / rvyna

Another black creator, @tylamadeit, made an alternate audio with the same message that isn't in AAVE for white women to use. She posted it with the text, "making a new audio for all the white girlies so y'all don't have to pretend to be a caricature of black women anymore." Her new audio goes, "And let me just be crystal clear, when it comes to a drinkity drink, I am going to have one." The audio is just as funny as the original and the exact same jokes can be made to it, without the cultural appropriation. The new audio has just over 850 videos made to it.

This trend is only one of many instances of cultural appropriation on TikTok. To echo @kierabreaugh, white people, be your authentic selves on the app.

Two popular songs on TikTok this week are "Rock With It" by Saucy Santana and "Don't Want to Fall In Love" by Kyle.

"Rock With It" has over 160,000 videos made to the song. The "Rock With It" trend relies on users looking like unexpected or undesirable celebrities or characters. The trend begins with users lip-synching the lyrics, "Oh I am curious," while the text on the screen reads something like, "You look like that one celebrity." Then, the user flashes an image of a celebrity and flips the camera back to them just in time to lip-synch the lyrics, "Bitch you serious?"

The trend is engaging because it allows you to guess the celebrity the user looks like, see the reveal, and decide if you agree all within a 15-second video. The trend is at its best when the user really looks like a celebrity or character that is super out of left field, like @lowlyworms_'s video, where he compares himself to Roddy in Flushed Away. No one wants to be told they look like a character in "Flushed Away."
Credit: tiktok / lowlyworm_

When users pick a universally beloved or absurdly attractive celebrity, the trend it misses the point, comes off as braggy, and elicits an eye roll from me.

The audio was first used by @_king.e to shoot a classic transition video, but has since become the audio for a trend where users list their most attractive qualities during the breathing part of the audio. When the song hits, users slump over and list their least attractive quality. The idea is that the final quality they list ruins all the previously listed good things about them.

One example of this trend was posted by @annaxsitar. It reads, "wholesome, blonde, smart, 5'6'', good sense of humor, ambitious, loves dogs," and is followed by "can't stop talking." There are over 90,000 videos like this.
Credit: tiktok / annaxsitar

I have yet to see a particularly funny example of the trend, but nonetheless, it is all over my fyp.

This kind of thing takes off on TikTok pretty frequently because people love to talk about themselves. It's reminiscent of a trend popular earlier this year where users would list something embarrassing or undesirable about themselves while pretending to get shot by that quality.

Another variation of the trend is girls describing how undesirable they are during the breathing part, then slumping over during the singing part to reveal their hot boyfriend behind them. This variation is even less funny than the original trend.

OK, this might not be the most viral trend on TikTok, but it is the perfect trend for spooky season. On Sept. 13, the iconic TikTokker @tannertan36 posted a video on his spam account @tanman99 of Goofy dressed in his skeleton Halloween costume at Disneyland. He calls out to Goofy and sings, "C'mon you are sick and you are married. Girl c'mon Phoebe, Phoebe."

He calls Goofy Phoebe in reference to Phoebe Bridgers, who is known to perform dressed in a skeleton costume, and sings lyrics from her track "Moon Song." The video is a masterpiece. He takes a depressing lyric, "You are sick and you are married" and sings it at Disneyland of all places, and he hypes up Goofy with the "Girl c'mon Phoebe."

Users have been pairing the audio with any skeleton decoration or costume they see out in the wild. As Halloween draws nearer, I hope to see many more of these videos on my fyp.