Not bad, I kept thinking to myself. I usually talk through my thoughts and today was no exception while using NordVPN. I was hopping around proxy servers on Chrome without any drops in speed. This is what using a virtual private network (VPN) should feel like. I noticed a similar experience on my Android phone where I didn’t have to sacrifice speed for privacy.

“Well, that’s not so great.” That’s me again when I started testing NordVPN on a MacBook. While NordVPN delivers in the privacy department, speed can be inconsistent. However, there are a few X factors, including Netflix access and availability in China, that make NordVPN perhaps the best option for many users, though to really get the most out of it you need to dig around a little.

We retested this a year later. NordVPN remains one of the best VPNs available today. The slew of privacy options and servers remains a huge draw as does its ability to get around geo-locked content on Netflix, Hulu, and more.

If you’re using the internet, you’re doing so through an Internet Service Provider (ISP). That ISP is also recording everything you’re doing in some capacity. While the data isn’t easily accessible or being used actively (to, say, serve you ads), you don't have a say in what does or doesn’t get logged.

A VPN, however, obscures your browsing habits and routes your IP address through a server the VPN company provides instead of your ISP’s server.

NordVPN takes a no-frills approach to VPNs. Monthly subscriptions start at $11.99, but you can save money by purchasing a six-month, one-year, or three-year subscription. The Android app features a blue and white map, some trees, a few boats, and map markers to identify VPN locations. A simple drop-down menu reveals your new IP address and your current location. 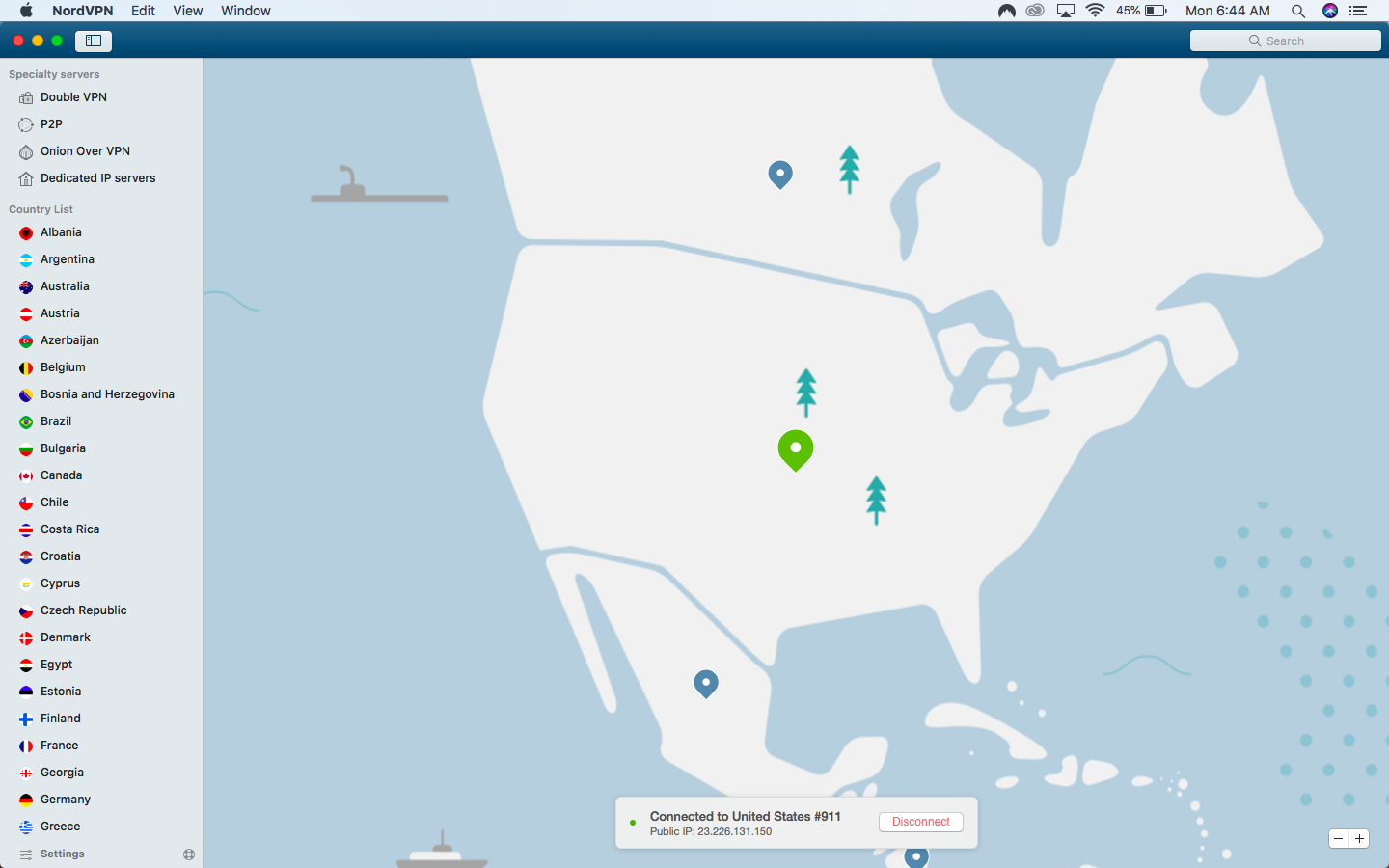 Over in settings, you can add more layers of security. The CyberSec option blocks ads and protects your phone or laptop from malware and phishing attacks. You can auto connect using Quick Connect, the default option, or choose your preferred server or country.

The app is easy enough to navigate, but there's a slight learning curve to the various offerings. You can't easily figure out if tapping on, say, "Obfuscated Servers" or "Auto Connect Server" will turn something on or take you to a new page with additional information.

Additionally, while generally easy to use, the Obfuscated Servers option isn't really explained. "Servers capable of bypassing specific country restrictions," reads the description, but what's the actual benefit of turning this feature on? Based on previous knowledge of VPNs, this feature hides the fact you’re using a VPN to make it look like you're using a normal server. So, I'd recommend residents of countries with restrictive internet laws should turn this feature on.

NordVPN works seamlessly across all the devices I tested. The Android app is lightweight with minimal battery usage, even when working in the background. Over on Chrome as a proxy, it works as you would expect. Just click on the drop-down menu, select your server, and start using a VPN. There are nearly 6000 servers in 59 countries, so there’s definitely an option out there for you.

NordVPN looks great on a Mac. It’s still minimalist, but all the features are easily accessible through the menu pane that drops down. You can search for features or quickly toggle on security features or see what VPNs are available.

While it’s not the most stylish VPN around, NordVPN more than makes up for it with an abundance of privacy features.

Like the label says, the Double VPN option funnels your internet traffic through two VPN servers. It’s anonymous on top of anonymous and ideal for the security-minded. This can help protect against any data leaks, but comes at the expense of speed.

NordVPN also lets users access the Tor network through its Onion Over VPN servers option. Your internet traffic is first sent and encrypted through their server, which is then sent to the Tor Network. You’ll be able to access to all the sites, from the harmless to the nefarious, found on the “Dark Web.” For torrent aficionados, NordVPN has P2P Servers optimized for peer-to-peer sharing.

Perhaps the best “security” feature is the country where NordVPN calls home. A company is subject to a country’s laws on what data and personal information is collected. Not surprisingly, some countries have more restrictive data storage laws than others.

If your VPN is hosted in one of these countries, it's possible any personal data and other information that the VPN service logs may be shared as part of an intelligence agreement (though many don't log any browsing info at all).

However, NordVPN is incorporated in Panama. The only data NordVPN is keeping is related to billing and website functionality. These details include email addresses, payment information, cookies, and data collected for Google Analytics.

Everything else you do using one of their VPNs will not be recorded, according to NordVPN. This includes everything from bandwidth usage to session information to connection timestamps. While you may never be involved in an investigation, NordVPN would not have much useful information even if they were compelled to turn over any data.

Still all of that would be for naught if there were data leaks. Fortunately, NordVPN is one tight ship. You can see if your VPN is leaking information through an online DNS leak test. A domain network service (DNS) leak occurs when information slips through the secure network. If a website you’re visiting requests your IP address and receives it from your ISP and not your VPN, then you have a leak.

Testing for a DNS leak on Chrome and on a MacBook revealed no leaks. Only one server was detected and my chosen country was correctly identified.

NordVPN is one of the few VPN options for China. Most privacy services are blocked in the country, so finding any VPN that works in China is worth your attention. It requires a bit more technical understanding and using the Obfuscated Servers option, but it works, at least per online sources.

NordVPN checks all the privacy boxes you need in a VPN. It has a no log policy, there are multiple options for additional security, and there are no leaks. Even better, NordVPN is as fast as it is secure. Well, almost.

Speed for most days

NordVPN says it uses an algorithm to identify the fastest server as part of its Quick Connect option. I was sent to a nearby VPN in New York and I never noticed a dip in speed. In fact, the VPN was just a bit faster than my usual connection in Chrome.

Switching to France and I noticed the same fast speeds, but did notice a significant drop in upload speed. That won’t be an issue until you decide to send a large file across the internet.

I did notice a huge drop in speed while using a proxy located in Argentina. Internet speed was at a near standstill and brought me back to the days of AOL and a dial-up connection. That’s not a good look in 2018. The Brazil proxy was better, but up to 40MB slower than what I experienced elsewhere.

Using NordVPN on a MacBook, I did notice connectivity issues and slower speeds. I could Quick Connect without a problem and most countries worked, but there were several occasions where I could not connect to a European country such as France or Germany. When connected to a VPN in the UK, I noticed a 30MB drop in speed. NordVPN remains one of the fastest VPNs and its performance improved in the latest tests performed by PCMag.

Slower speed can be forgiven if there’s something to counter this negative experience. Luckily, Netflix works on NordVPN and that may be enough of a selling point for potential customers.

Netflix has been dogged in its pursuit to crack down on VPN and proxy usage. I was thwarted from watching region-locked shows while using TunnelBear, but that was not the case with NordVPN. I had full access to a range of UK shows through NordVPN. CNET had no issues accessing Netflix, but PCMag had issues bypassing Netflix’s security measures in its tests.

One heck of a VPN

It’s easy to see why NordVPN has received a lot of love from VPN enthusiasts. There are a lot of privacy options and all of them require a simple button press to toggle on. Speed can be a concern, but that’s a caveat for all VPNs.

NordVPN stands out for its privacy features and its ability to fly under the radar of both Netflix and China. That’s a huge achievement and one worth the price of admission. While it may not be the most user-friendly VPN around, NordVPN should be considered by anyone serious about privacy.