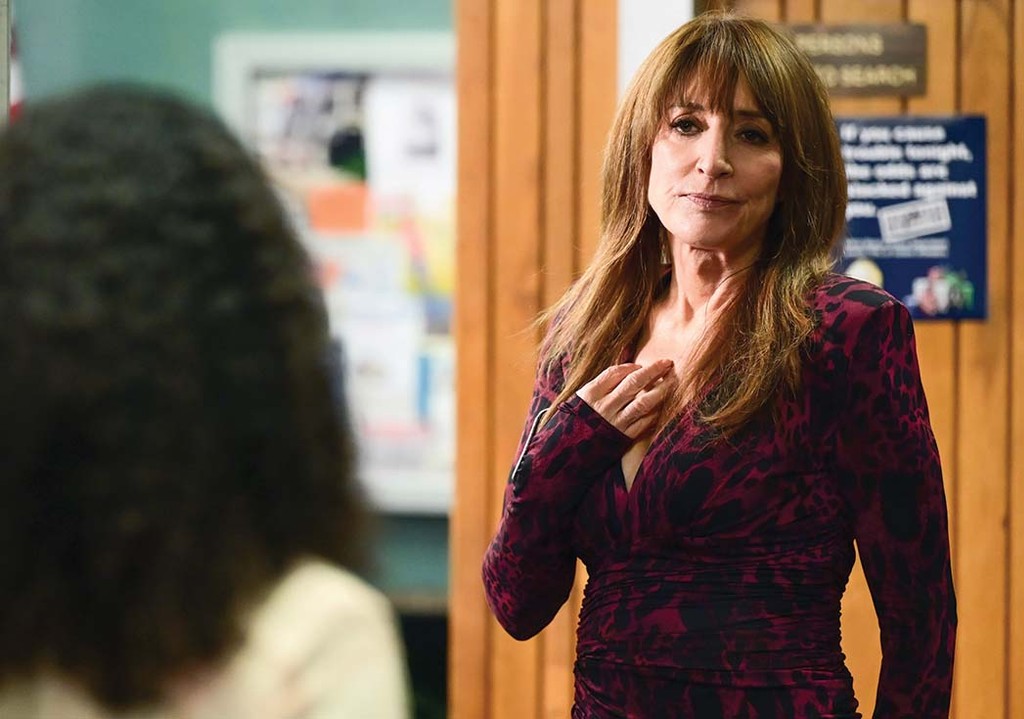 Katey Sagal plays an anti-corporate crusader in this ABC drama based on the life of Erin Brockovich and co-starring Andy Garcia and John Corbett.

Very few people have ever called Erin Brockovich — her manner, her personal affect, her crusading approach — "subtle." Trust me. I googled.

Nobody is likely to call Rebel, a new ABC drama "inspired by the life of Erin Brockovich today," subtle either. Krista Vernoff's series tells you what it's thinking and feeling to an exhausting degree, barks out its iconoclastic ideology at every turn and still somehow ends up feeling like an entertaining broadcast TV throwback. Credit there goes to Vernoff's smart structuring of the story and an outrageously good cast led by Katey Sagal.

"I have nothing against corporations. Corporations can do a lot of good," emphasizes Rebel, a character on a drama on a broadcast network owned by the Walt Disney Company.

Rebel lives in a Los Angeles in which basically everybody seems to be either her ex-husband or one of her children, and no matter how acrimonious the breakup everybody is always happy to assist her, after an exasperated harumph of, "That's just Rebel being Rebel!" On the spousal side, there's her ex Woodrow (Matthew Glave), a cop prone to rolling his eyes in resignation before bending the law on Rebel's behalf, and Benji (James Lesure), a lawyer Rebel divorced when he went to the corporate dark side (pretty much vintage "That's just Rebel being Rebel!" behavior). She's currently married to Grady (John Corbett), a musician, or something, who may be getting frustrated with Rebel being Rebel as they approach their 10th anniversary.

Vernoff and the early Rebel directors keep the show pinballing effectively among case-of-the-week elements — an abused wife Rebel meets in jail, a professor facing university discipline — and the slowly unfolding case against the medical company. The result is a show in which a tremendous amount is happening at all times and yet we're still able to learn a lot about individual characters, which is where much of that declarative expositional dialogue comes into play. Nobody in Rebel doesn't say what they're thinking, or what they're being motivated by 100 percent of the time. In 95 percent of shows, that would irk me to no end, but in this show, everything feels true to a main character who's begrudgingly proud when a paparazzi picture of her falling off a stage at a protest is an up-skirt shot.

The thing is that Rebel doesn't care if you tolerate Rebel and her rebellious ways or if you're in league with the dozen characters on Team Exasperated Harumph. Love Rebel, love her anti-corporate crusading, it doesn't matter just so long as you're engaged in what's happening in either main storyline. I generally was.

It helps immeasurably that Sagal is as good as it gets when it comes to making larger-than-life characters feel believable. Rebel is right in the vast middle ground between the comically operatic Peg Bundy and the tragically operatic Gemma Teller Morrow. They're women who charge through life simply assuming that everybody around them is paying attention only to them and moving out of the way to accommodate them. What makes Rebel work is that she mostly fails to recognize the debris she leaves in her wake — or carries along with her, since she somehow avoids mass estrangement — but sometimes she does realize, and those fleeting cracks in the facade make her human.

This is a pure star vehicle for Sagal, so it's almost hard to believe the sheer number of actors who might normally be second or third on the call-sheet who are happy to come in, nail a scene or two and leave. Lesure, Glave and Corbett mostly have variations on good-natured chagrin to play, but they do it well. By virtue of the character's recent grief, Garcia gets to do vexation and then a little more and it's actually one of the better parts he's had in recent years. If the performances by Davis, Barer and Zegers are harder to warm to, it's because their characters are constantly doing really dumb things, which the show endeavors to suggest result from having Rebel as a mother.

I've highlighted plenty of stars and co-stars without even getting to Mary McDonnell, Dan Bucatinsky, Adam Arkin as a sneering corporate suit and, best of all, Abigail Spencer as a fast-talking doctor who calls out Zegers' character.

No matter your taste or generation of TV viewership, Rebel's bound to have least one actor you already love from a previous show, and that's all part of the show's main secret: It's called Rebel and it's about a woman everybody says is a rebel, but it's also a very broad-skewing show about a very famous woman whose life was previous adapted as an Oscar-winning blockbuster film. Aesthetically and narratively, it's about as rebellious as a chocolate chip cookie and that's probably a reasonable thing for a broadcast network to be making in 2021.