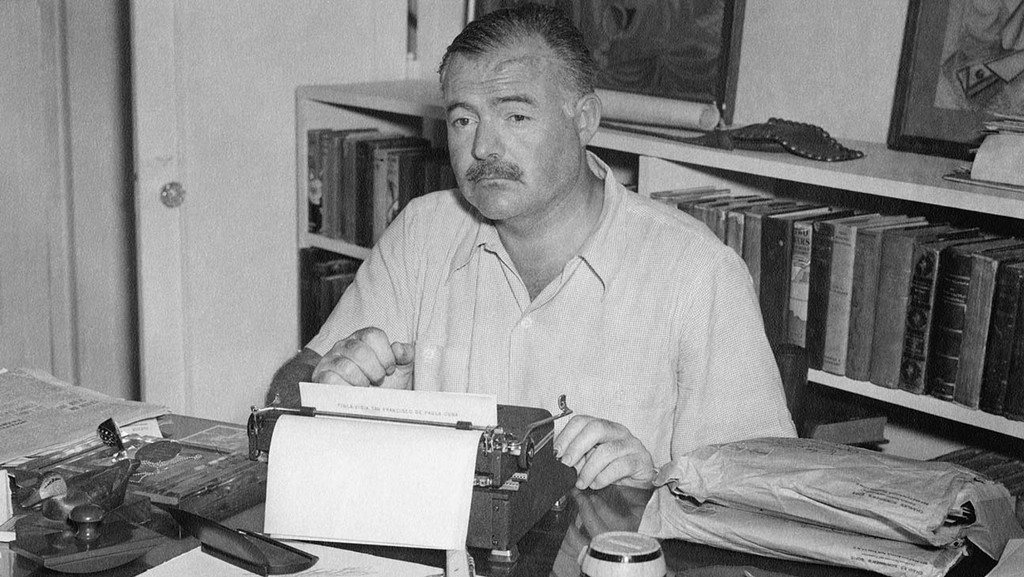 Ken Burns and Lynn Novick turn their attentions to Ernest Hemingway in a six-hour, warts-and-all PBS examination of the blustery literary titan.

For around four decades between the 1920s and 1950s, Ernest Hemingway dominated American arts and letters in a way it would be hard to imagine any novelist doing today. He wrote novels and nonfiction and short stories and dispatches from the frontlines of World War II. His books won awards and they were bestsellers and the only thing critics could compare Hemingway's work to was whatever Hemingway had written before. He built a persona defined by uncompromising masculinity. It was a paradigm. It was a construction, a myth.

As powerful as that mystique was in the first half of the 20th century, it would be impossible to think of a figure less-suited for glorification in the first half of the 21st century. Hemingway lived hard, loved hard and worked hard. He was an alcoholic, a philanderer and an abuser. His books celebrated war, or at least a version of heroism that could be expressed through war. They glorified hunting. They mythologized bull-fighting.

Is 2021 the worst time imaginable for a six-hour documentary about Ernest Hemingway? Maybe.

Is 2021 the best time imaginable for a six-hour documentary about Ernest Hemingway? Maybe.

Ken Burns and Lynn Novick are prolific discoursers with virtually no limitations imposed on them beyond the fact that they're constantly researching five or six documentaries past the one they're actively making. Their cinematic vernacular and storytelling exhaustiveness could not be more at odds with Hemingway's terseness, his deceptive simplicity, his ruthless self-editing.

In that sense, PBS' new six-hour Hemingway is excessive and discordant, with regular writer Geoffrey C. Ward's winding, embellished sentences clashing with Hemingway's own distinctive writing, read here by Jeff Daniels, who delivers far more sensitivity than Hemingway himself might have felt comfortable with.

But Burns and Novick are pragmatic romantics, aspiring to iconic portraits built out of as many contradictions as they can find about their subjects.

So is Hemingway too long? Yes. Does Hemingway have enough rewards to justify its length? Also yes.

The three nights are divided into "The Writer," "The Avatar" and "The Blank Page" or, put a different way, "The Man," "The Myth" and "What We Find in The Wreckage."

Hemingway is partially biography, recounted by experts and biographers through the traditional Burns/Novick use of archival footage, some recognizable from the writer's public persona and some newly revealed. Much of it is familiar-but-clarifying, parsing the realities of Hemingway's WWI record from the drunken stories he might have told at a Key West bar. Some of it is horrifying, like the unhinged rant Hemingway wrote his publisher instead of a blurb for James Jones' From Here to Eternity. And in some cases, the reality exceeds even the reputation; no matter how well you think you know the havoc of Hemingway's later years, nothing can prepare you for what he endured and brought upon himself.

This isn't like a Baseball or The War or The Dust Bowl, when the filmmakers were scrambling to get primary source narratives about the events before we ran out of living witnesses. Over six hours, Hemingway contains exactly two people who knew Ernest Hemingway, and only his son Patrick, spritely in his early 90s, has real insight. Even with the voiceovers from Daniels, as well as the likes of Keri Russell, Meryl Streep and Mary-Louise Parker, I found this side of the documentary to be at times interesting, but it definitely wasn't what kept me going.

What makes Hemingway work — what inspired me to add several Hemingway books that I either haven't read or haven't read since college to my online shopping queue — is the almost text-by-text analysis of his writing. Literary scholars and fellow authors alike reflect on changes in Hemingway's prose and themes, juxtapositions between specific works and Hemingway's life at the moment those works were written, and alterations made in various different drafts.

It's my assumption that it isn't nearly as easy to find dedicated Hemingway scholars or brand-name authors willing to rhapsodize as it might have been in 1975. Burns and Novick still get an admirable selection. Even the most worshipful from that group is able to be candid. It's maybe the most exciting and fun part of the documentary when somebody like Irish author Edna O'Brien, after five+ hours of nonstop superlatives, turns harshly on The Old Man and the Sea, or the several moments devoted fans can't stop themselves from laughing at how Hemingway wrote sex scenes. It's a smartly chosen group, whether it's Peruvian author Mario Vargas Llosa or Cuban novelist Leonardo Padura Fuentes discussing a man who invested so deeply in the Spanish-speaking world, or Tobias Wolff, whose various types of writing and themes somewhat mirror those of Hemingway.

For all of the six hours spent on the author, there are still fruitful avenues for more books or documentaries on Hemingway. Conversations about challenging gender roles in Hemingway's writing and in his own sexual past are started, with much more still to debate. And there's only so much anybody can say about Hemingway's history with racism and racial epithets — the extent to which they captured his own feelings and the extent to which he was trying to reflect a culture around him, one he definitely wasn't always canonizing.

I'm not sure if I'm ready for another two or three hours talking about Hemingway. But I'm definitely ready to dive back into his writing. For one PBS documentary, however long, that's triumph enough.