See Ruth Bader Ginsburg's Trainer Honor Her With a Set of Her Favorite Exercise: Push-Ups 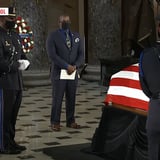 Ruth Bader Ginsburg was iconic for so many reasons (seriously, pick any), and one of the many things she was known for was her dedication to health. We're talking about a woman who was crushing workouts into her mid-80s, lifting weights and working on her flexibility with longtime trainer Bryant Johnson. After the Supreme Court justice passed away last week at age 87, her casket was taken to the US Capitol today to lie in state. Johnson was among those there to honor her, and he did so in a way we know RBG would love: by completing a set of perfect push-ups.

Why push-ups? As Johnson told POPSUGAR in a 2018 interview, push-ups were actually Ginsburg's favorite exercise. "When we first started training, she didn't think she could do one," he said. "But she started on her knees and worked her way up to a full push-up. Seeing her eyes the first time she accomplished the full push-up was great - she felt the strength." Ginsburg would complete sets of 20 push-ups on her toes before moving to an even more advanced move: one-armed medicine-ball push-ups.

"The justice has faced every challenge, from fighting cancer two times to working one of the most challenging jobs there is, and she always makes time to work out and give it her all," Johnson said at the time. Ginsburg's dedication to fitness became so well-known over the last few years, Saturday Night Live made a whole skit out of it, and Stephen Colbert joined her for a workout (she kicked his butt). Ginsburg gave 100 percent in the gym, so we know she'd love Johnson's unique and touching tribute at her memorial.